On Saturday 10th of October 2015, a very special aircraft flew for the last time over its place of birth, Woodford Aerodrome.  Sporting great delta wings and dressed in camouflage livery, Avro Vulcan XH558 performed two flypasts.  The audience of thousands beneath were almost hypnotised by the menacing yet graceful flight, and the famous howl it emitted as it accelerated.
The spectacle marked the end of an era for the fully restored XH550, the only air-worthy Vulcan in the World, flying again since 2007.  The aerodrome and runway, now almost completely demolished, was opened by Manchester based Avro (A. V. Roe and Company) shortly after the First World War, and was an intense centre of production during the Second World War.  The Avro Vulcan was first sketched by Avro’s Chief Designer Roy Chadwick in 1946(!), who was also responsible for designing many other highly regarded aircraft such as the Lancaster bomber, the Avro Anson and the Avro Shackleton.  It was a tragedy when Roy died in an aircraft accident the following year, but Stuart Davies fortunately was able to take Roy’s idea to reality, and the first full scale prototype Vulcan flew for the first time on 30th August 1952.  Roy Chadwick is buried in the graveyard of Christ Church, Woodford. Considering his enormous contribution to Britain’s war time aviation effort, the grave is somewhat humble. 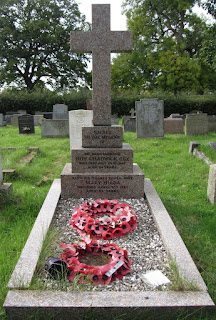 Roy Chadwick’s grave at Woodford Parish Church
The Vulcan bomber was created to be part of the V-force, which was Britain’s (and part of NATO’s) strategic nuclear deterrent during the cold war from the 50’s to the late 60’s. It continued in service and the first and only time a Vulcan flew in anger was in 1982, when a Vulcan was used to perform the furthest bombing raids in history (at that time).  A complex mid-air fuelling strategy was enacted to enable the Vulcan to bomb the runway at Port Stanley Airport during the Falklands crisis.
The Woodford born Vulcan remains an icon of British engineering, and has induced much emotion in those who have been fortunate enough to witness it in flight. After the aircraft finally departed from view for the last time at Woodford, a spontaneous round of applause came from the grateful spectators, many of whom made no attempt to hide a tear or two.
Video of the Vulcan’s last fly-past at Woodford