This morning a viewing of the recently unearthed remains of the Edward Street windmill took place, arranged by Paul Hartley of Stockport Council.  An archaeological excavation and documentation of the site was in progress, and we were guided by the archaeologist’s team leader.

The windmill stood on the site of the former Hollingdrake’s car showrooms on Edward Street, adjacent to the Town Hall, which as a building closed for the last time in 2015.  It was built in 1784-85 to provide power to the Edward Street Mill.  Wind power was superseded at the mill in 1795 when a steam engine was installed.  The mill had closed by 1842.  Local groups used the windmill as a meeting place, including the Independent Methodists (1817 – 1820), and from 1818 by the radical ‘Stockport Union for the Promotion of Human Happiness’.  The windmill was demolished in 1857.  In 1922 the foundations of the windmill were discovered during construction of Hollingdrake’s showrooms, and they were preserved under the first floor of the building. 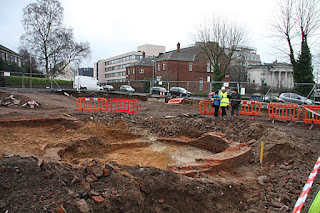 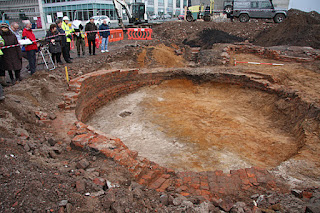 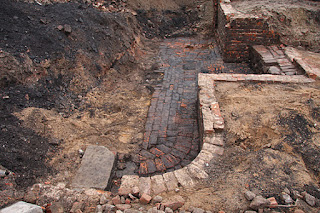 The site was re-discovered in mid-January 2016, and is soon to be cleared to make way for a new build (Stockport Homes).  Archaeologists have performed a rapid documentation of what they have unearthed, and information panels illustrating the history of the site will be on display in the new building.